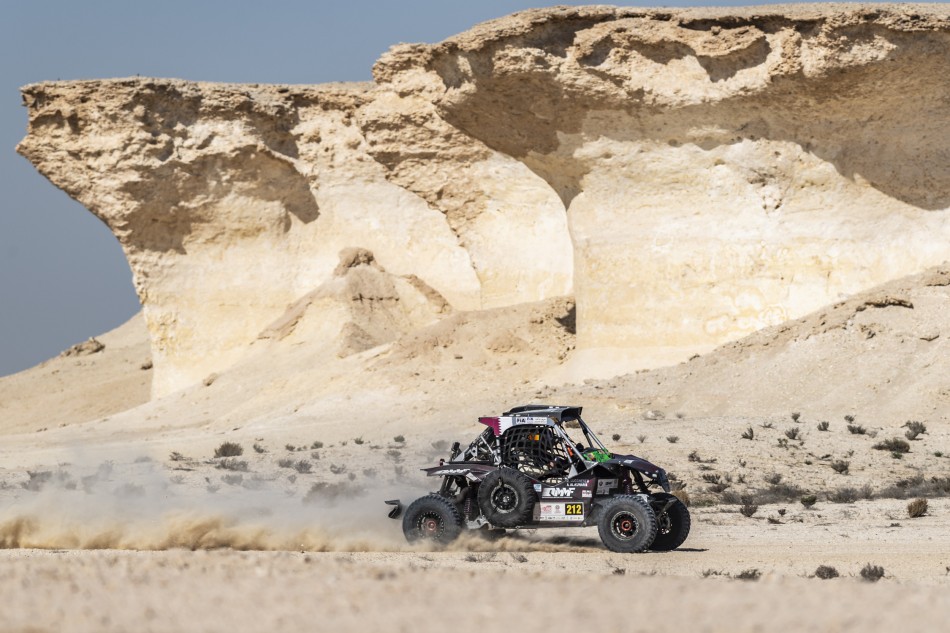 Nasser Al-Attiyah and Mathieu Baumel claimed an emphatic victory on the Qatar Cross Country Rally, the opening round of the FIA World Cup for Cross Country Rallies. The Toyota Hilux pairing romped through the final selective section to take the fastest time and a winning margin of one hour 31 minutes and 40 seconds. Yazeed Al Rajhi and Michael Orr finished second, the Hilux cars locking out the podium with Jakub Przygonski and Timo Gottschalk in third.

Thursday’s final day of competition took in one selective section of 254.58 kilometres with the route heading north, hugging the western coastline before turning southwards and finishing in the central desert.

Al-Attiyah started third on the road and powered through the section to win the stage by just 24 seconds over Przygonski. Today’s victory represents the Qatari’s seventh home win in nine years while co-driver Baumel has now stood on the top step of the podium six times. “I’m happy to take this win, it was not easy, there was a lot of hard navigation and today we had three flats,” said Al-Attiyah, winner of four of the five selective sections. “To win you need no navigation mistakes and the least punctures. This is a good start to our championship campaign,” concluded the Qatari, who takes a 10-point advantage in the series standings after the first of five events.

Adding to his comments, Baumel said: “Like every year it is not easy for the co-drivers. The two first days were the most difficult to see the lines, and then it became more enjoyable. We have finished well and it’s good points for the Championship.”

After winning yesterday’s stage, Al Rajhi had the task of opening the road and trailed Al-Attiyah by just over five minutes through the section. “We had a small tyre problem, it stripped out, and then we also had a puncture,” said Al Rajhi, who arrived at the finish with resultant rear panel damage on the Hilux. “I’m happy with this position; this was the plan for the start of the season.”

Przygonski completed the section second to finish on the podium in his first outing in the Toyota. After dropping a substantial amount of time with damaged steering earlier in the event, the Pole bounced back from seventh position to claim the final trophy. “We all had the same problem before the finish when we lost the pattern [tread] of the tyre,” said Przygonski. “It was hard on the tyres today, stony and very hard ground. I’m happy in the end after our earlier problems. It was a good race and we learnt the car and what we need to do to be faster.”

There was a shakeup behind the leading trio and Ahmed Al-Kuwari seized the opportunity, he and co-driver Manuel Lucchese snatching the T3 victory in their Can-Am Maverick in the final stage. “There was one of two results today; either we win or we bring the steering wheel back!” said the delighted Qatari. “I saw that Khalid [Al Mohannadi] had problems because we passed him on the piste a few times. We got lost also. It was really rough and we suffered one puncture. We were driving like there was no tomorrow; it was always going to go one of two ways…”

Saleh Alsaif and Ali Hassan Obaid took second in the category but there was bitter disappointment for Khalid Al Mohannadi and Sébastien Delaunay. T3 leaders for three of the five legs, the Polaris crew were struck with two punctures in today’s section and forced to drive the final 50 kilometres with the rear left on the wheel rim, dropping them to third in the category.

The second round of the FIA World Cup for Cross Country Rallies keeps the contenders in the region for the Abu Dhabi Desert Challenge (20-26 March).

admin - January 19, 2020
4
The Senior Bowl serves as the unofficial start of the draft season. This week, I'll be bringing you previews of the quarterbacks, running backs...

‘I had a bad night tonight’

‘I was very hard on myself’

The Wysh List – Five essential traits of an NHL pest