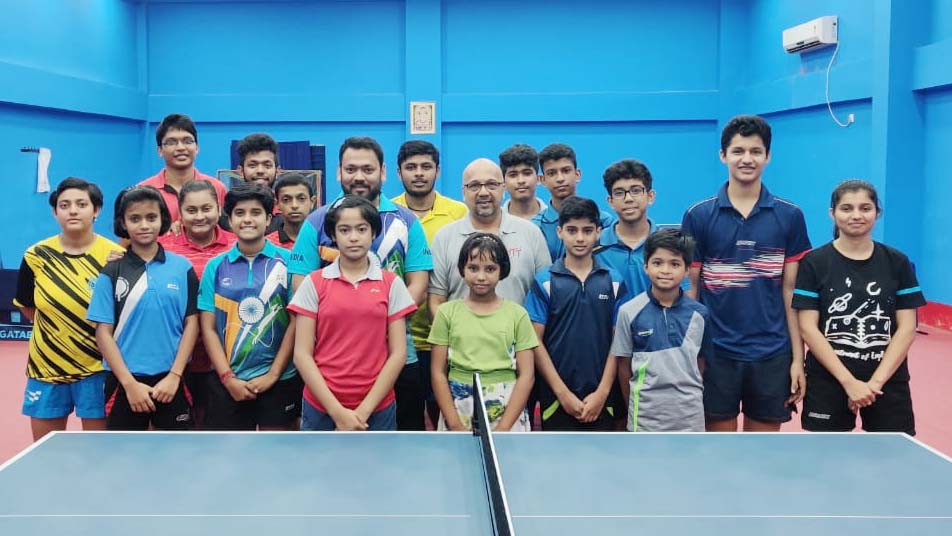 A tournament which defied the traditional ambit of playing stereotyped matches, brain storming over every aspect of the event, Ultimate Table Tennis (UTT) turned out to be a wonderful masterpiece sculpted right from the heart of a true sportsman.

Kamlesh Mehta the indispensible part of Indian table tennis, be it as a player, coach, selection committee member, advisor to government on sports matters, currently serves as director of company exclusively formed for promotion and development of table tennis.

“I felt indebted towards the sport, post attending Athens Olympics as a coach, I was determined to give back to table tennis and to my country. My dream was further embraced by co-founders Ms Niraj Bajaj (two times Indian national champion) along with passionate and dynamic lady Ms Vita Dani. This led to unfolding of our company 11Sports Pvt Ltd (ESPL).” Malesh Mehta

The highly adrenaline pumped players, captivating crowd, visiting luminaries, the Bollywood stars, business magnates, the UTT aura itself leaves you mesmerized and to top it with a hefty pay cheque for the players. The mega event organized by ESPL – UTT is the brainchild justly synonymous to its name “Ultimate Table Tennis”.

Kamlesh Mehta is advancing ahead taking a holistic approach, “we have adopted five table tennis academies and we also conduct school events, state leagues and corporate events. The dream doesn’t end here he says “we further are looking forward to open a world class training centre with cutting edge facilities, crafting out more innovations involving the corporates, media and fans in the game to spread the glory of this sport all over”.

Roy represents the famous Wall Street Bull, the courage and can-do spirit of the Indian team.

“I have been a part of Indian team since 1998 and along with my teammates we have really pushed the bar high. During my time we often faced a need of having good infrastructure, practice partners, physios and conditioning coaches, mental trainers. All this did exist then but as an upcoming player it was really very difficult to figure out when and what is needed. I always felt void and needed a mentor/coach who would be able to sort me out completely to play at the top level”. Soumyadeep Roy

The dream to mentor youngsters and mould them into strong players for India, Roy started his own table tennis centre in eastern part of India, Kolkata along with his wife Poulami Ghatak (Olympian and multiple times Indian national champion) named as SPTTC.

“I have set up my own academy with the intention to mentor players in all aspects of their game. The challenge of mentoring someone is not creating them but giving them the opportunities to create themselves. Predominantly, I wanted to give them an infrastructure where they can train and give their best. I want to give back and maybe more of whatever knowledge I have in this sport. I don’t want to create only players but men who would be the next role models for the society.” Soumyadeep Roy

“We are thankful to ESPL (Kamlesh Mehta) for standing strong behind our vision. So far it’s been a successfully journey with Suthirtha Mukherjee breaking in top 100 in women’s and rising star Jeet Chandra placed ninth as per under 21 world ranking list”.

Raman has shouldered the Indian flag for over 15 years and is known fiercely in table tennis circuit for his sharp acumen is the mastermind behind “Khelo India -Raman TT HPC”. Raman honing his coaching skills since 2005 has mentored many top Indian players. Among his wards, Amalraj Anthony achieved notable international accolades and now the best bet of the centre Sathiyan Gnanasekaran has entered in World top 25 in men’s rankings.

“Nurturing a baby is a difficult task but when the baby is your favourite one, you end up putting all heart and soul into it” recollects Bhavna Raman, (a former international player) as her motherly instincts take over, the most pampered baby, whom she calls as their third child named as “Raman TT High Performance Centre” launched in 2016. The centre was then accredited under “Khelo India” an initiative by Government of India to promote sports, since then it is called as “Khelo India -Raman TTHPC”

Both of them took a momentous decision of quitting their highly paying public sector jobs to dedicate themselves for full time professional coaching and investing all their life savings to the tune of US$100,000 (Rs 75 lakhs) in developing “Raman TTHPC”. No penny in pocket and with Olympic dream in their eyes, the centre was started to create Olympic medallist, a never done before task for India.

The centre based in southern tip of India (Chennai) has ensured that players have access to world class facilities. Being a technical and fitness geek, all the strategies, video analysis using in-house analysis tool and technical aspects of the game are developed and designed by Raman Subramanian. The centre believes in having a scientific support system and have taken extended help from field experts for mental and fitness conditioning, nutritionist, bio-mechanics analysis, yoga expert, needed for creating World class champions.

“To produce world and Olympic medallist from India, we have a huge reservoir of talent and we are focused on developing a sound and uniform pedagogy in coaching at grassroots pan-India suitable for Indian DNA players. This will ensure our gestation time to turn into a senior India team player is reduced to six-seven years from present levels of 13-16 years. We can then have more athletes rising and performing at younger age in senior events globally.The rise to the world top level then becomes lot easier and India becomes a huge market for World Table Tennis.” Raman Subramanian

admin - August 5, 2020
0
World champion, P.V. Sindhu, resumed training on Wednesday at the Suchitra Academy, which she considers as her ‘second home’.As the state government eased out...

The NBA is proceeding with extreme caution

Cowboys’ Andy Dalton eyes season as setup to ‘second half’ of...

How AHL cancellation affects NHL; trade candidates for every team